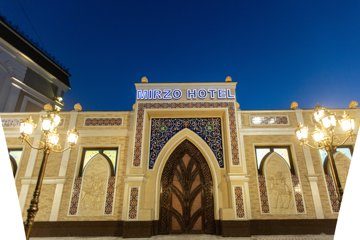 MIRZO BOUTIQUE HOTEL is located in the very center of Tashkent city. It was important to choose a location prior to the creation of this hotel. Because the location of the hotel must meet all the requirements of residents. When creating MIRZO BOUTIQUE HOTEL it was important to take into account the presence of diplomats, businessmen, tourists and other representatives. MIRZO BOUTIQUE HOTEL was built on the basis of many years of hotel and tourism experience. His project and idea was created by one of the most experienced architectural and design companies in Tashkent based on specific proposals from the founders of the MIRZO BOUTIQUE HOTEL. The hotel is built on the basis of Uzbek national architecture. Its creation was an integrated approach to the traditions of nationality, history and modernity. We strive to preserve all aspects of the global hospitality and tourism experience and Uzbek hospitality. 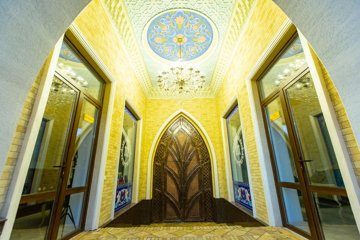 First of all, about the architectural appearance of MIRZO BOUTIQUE HOTEL: the main front entrance of the hotel itself attracts guests with its colorfulness. The MIRZO BOUTIQUE HOTEL gate is a vivid example of the ancient Uzbek watchdog art. The gate is in historical and traditional style, and many of the deep patterns of the past have been explored. Today, engravers are attracted to the production of the most experienced cast iron. The upper part of the gate has the shape of a triangular arc. 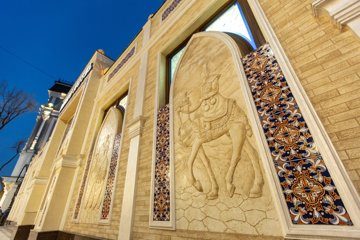 On the left and right side of the gate, there are portraits of Chinese, Indian, Turkish, Saudi Arab and African continental traders, who overlook the ancient Silk Road. A caravan of camels and major traders is depicted in national costumes and clothing. On the front side of the wall gate, the windows are arc-shaped. Additional arcs are also available. The walls were built in the style of ancient brick patterns. The front door of the MIRZO BOUTIQUE HOTEL with gates, sides, side parts of the caravan is covered with various mosaic mosaics. The harmony of such architectural and wall decorative art is unique in Uzbekistan.

Upon entering the hotel, you can see a corridor with large chandeliers based on examples of medieval lamps. The corridor is a vivid example of ganch carpets, the fine art of painting. The walls are based on ancient brick patterns. The history of these bricks links several millennia. They were made in the old Tashkent style and were collected from the old part of Tashkent during renovations. All of the hotel's wall sconces are covered with unique marble finishes. 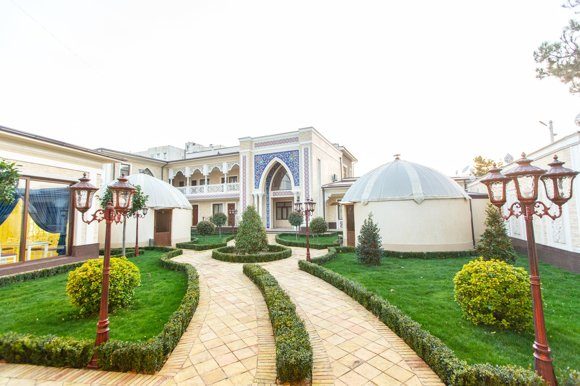 You can also enter the courtyard through an arc and the first thing you see is a beautiful landscape of the medieval tradition combined with landscape design. The exotic shrubs in the garden have a unique beauty. All trees are covered with underbrush. Their edges are beautifully decorated with hedges. The ground is covered with green grass. Trees and flowers are grown in our region - Uzbekistan, and they are always green in winter and summer. Courtyard walls are an example of fine art. The courtyard walls can also be seen at the national art level. The walls are on ancient medieval bricks, and on a decorative basis - carvings. The most important feature of the walls is their novelty, in that they are decorated with architectural monuments of several historical cities of Uzbekistan. 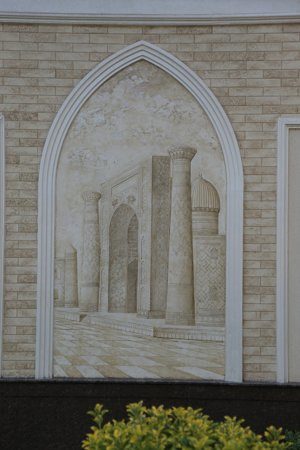 For example, Sherdor madrasah on Registan square, Shahizinda complex, Gur-Emir mausoleum in Samarkand; Minorai Kalon in Bukhara; Khiva Museum-Reserve Unique architectural monuments of Ichan-Kala. The lamps in the courtyard are on, and it seems that they have returned to those days. In the upper part of the courtyard there are one and two-storey buildings, each with a terrace. You can also see examples of blacksmithing work.

As you know, there is a huge building of the Circus in Tashkent. 20 meters from the main entrance to the Circus, you will see MIRZO BOUTIQUE HOTEL. Considering the fact that the circus building is one of the highest points in Tashkent, MIRZO BOUTIQUE HOTEL shows its status. MIRZO BOUTIQUE HOTEL is located near the Circus (with two fountains), as well as next to the national and academic theaters, the Chorsu bazaar and the metro, the Khazrati Imam architectural complex, the Museum of Nature, the House of Children's Art, the Planetarium, the Center for Islamic Civilization, the Park of Culture and rest them. Abdullah Qadiri, Gulbozor neighborhood, Zarkaynar and Navoi streets and the historical Khadra square. The uniqueness of the hotel's location is that it is located in the middle of the border between the old and the new city. We have built this hotel with these aspects in mind. We hope you enjoy our hotel.